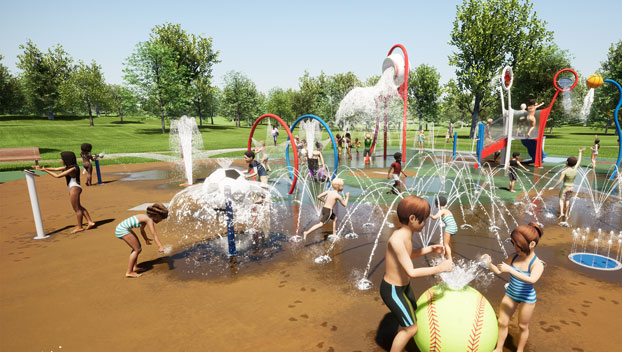 Plans have changed as weather has taken a toil on construction and forced the opening date to be pushed back to the end of July.

“That’s not what I want to say, but we’ve got to get it done right,” said Russellville Mayor David Grissom. “It’s obviously very disappointing.”

Construction was anticipated to finish on time, but the recent continued rainfall forced construction to be delayed.

“We didn’t anticipate rain over half of the days in June, so that really makes construction plans change,” Grissom said. “There isn’t a lot we can do with this much rain.”

Vance said he expects to begin pouring concrete for the splash pad in the next few weeks, but first some things with excavation have to be finalized.

“Our first core value is to build things we can all be proud of,” Vance said. “While we do have to navigate the weather, that still stays our main goal.”

Grissom said the construction area will be blocked off for Jam on Sloss Lake, and additional activities for children will be provided.

The city council approved construction in March, but construction did not begin immediately because a purchase order had to be made for all of the supplies.

Excavation began immediately, but Vance said it typically takes eight to 10 weeks for everything ordered to arrive.

The splash pad will be located between John Blackwell Sports Complex and Sloss Lake on Highway 24, with the project costing $444,729.50.

Of the $444,729.50 to complete the project, $309,000 will come from a donation from Pilgrim’s Pride, and the remaining funds will come from an amount the city had previously set aside for a splash pad in the 2019 Capital Improvement Fund.

The splash pad will be 6,000 square feet and run on a flow-through system, using fresh water.

Rhe splash pad will boast various features, including an elevated area with slides and spray features.

Grissom said the splash pad has been discussed since 2008.